berlin is a dog-friendly city to visit 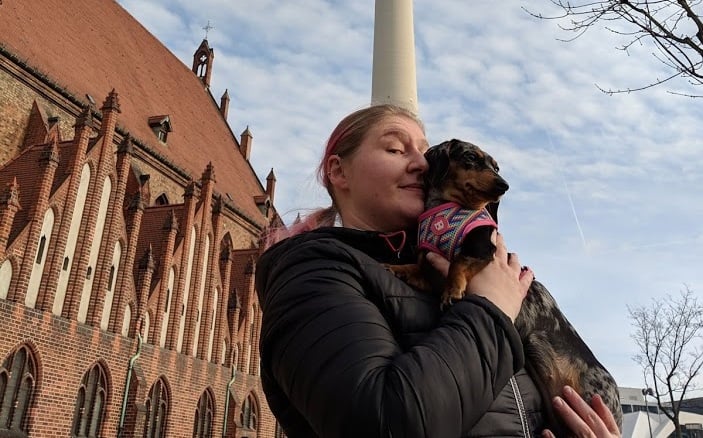 SHARE THIS ARTICLE!
Facebook
Pinterest
Email
We visited Berlin with our miniature dachshund. Our dog had a great time discovering the city with us :) Here are some dog-friendly hotels and restaurants.

We spent a few months in Berlin in the past and knew the city quite well. We decided to visit Berlin during one of our extended visits in Europe. This time, it was with our wiener dog in tow. It was an opportunity to rediscover the German capital – its good and bad sides – with our little beastie.

Berlin was voted the most “dog friendly” city in the world in 2011, so we were curious to see what this was all about. Here’s a recap of our trip.

Taking the plane to Berlin with a Dog

We arrived from Vienna via Tegel, the airport northwest of Berlin. We chose to fly with the very dog-friendly airline, Austrian, because it offered a convenient connection to Vienna and accepted our pet in the cabin. This choice was also motivated by the fact that we preferred Tegel to Schönefeld. It’s a smaller, better organised airport, closer to the city center and located in the North, where we were going to stay.

AIRPLANE AND TRAIN ARE GREAT OPTIONS TO TRAVEL TO BERLIN WITH YOUR DOG.

If you come from France, Belgium, Switzerland, Austria, or another country bordering Germany, you can also take the train. Most train companies accept dogs, even large ones. Make sure you find out before you leave. Other airlines also accept dogs in the hold and in the cabin. So you’re spoilt for choice.

How to Get to Mitte From the Airport

The flight with Austrian went well and the arrival in Tegel was smooth. From there, it is easy to reach the city centre using the TXL Express Bus, which connects the airport with Berlin’s main railway station (Hauptbahnhof) and Alexanderplatz. Although often full, this bus takes us quickly into the center (Mitte) – in less than 35 minutes – and costs less than 3 euros per person. We kept our dog in his travel bag at all times, hung on one of our shoulders or sat on our lap, and everything went well.

If you are coming from a railway station – the Hauptbahnhof, for example – you can easily reach your destination by tram, underground or bus. Berlin’s transport system is vast, extensive and efficient. And it is dog-friendly.

From Schönefeld, Berlin’s main airport in the south of the capital, you can take a train and metro to the center. Again, pets are allowed, on a leash of course.

Taking the Bus or Metro With a Dog in Berlin

Taking your dog on a bus or metro in Berlin is free of charge if you have a day ticket. However, your pet must be kept on a leash and is supposed to wear a muzzle that fits its size. But small dogs can travel free of charge in a bag without a muzzle – at least that’s what we understand. The second option applies to our dog Mocsing. Whether on the subway or the bus, we have always kept her in her bag and have had no problems.

DOGS ARE ALLOWED ON PUBLIC TRANSPORT IN BERLIN.

We met many dog owners in the subway and tramway, they did not always use a muzzle, but always a leash, and kept their pet very close. This is a widespread and accepted practice.

Finally, note that we have used Uber several times with our dog and have never had any problems. In the worst case, it may be a good idea to contact the handler when booking.

Finding A Dog-Friendly Hotel in Berlin

When it comes to accommodations, the question always arises: what hotel accepts dogs? During our trip planning, we found a number of dog-friendly hotels, including Ibis – known to accept dogs. But be careful, the city often organizes events of international magnitude, which means that the hotels and AirBnBs are regularly taken over. This was the case when we visited in February 2019.

Luckily, we found a very good hotel, the Pfefferbett Hostel. It is technically a hostel, but it offers both collective dormitories and individual rooms with en-suite bathrooms. The Pfefferbett accepts dogs, but only in single rooms. There are 3 single rooms, all located on the top floor. They are spacious, quiet, clean and tastefully decorated (Berlin style, very minimalist). The cost per night is around 80-100 euros with a supplement of 10 euros for a dog. The hotel has a lift, washing machines and a restaurant/bar on the ground floor (with very good homemade beers). The hotel also offers free internet (the connection did not always work during our stay, however, which was problematic). Another advantage of the hotel is that it is very well located, about 15 minutes from Alexanderplatz and a stone’s throw from Rosenthaler Platz and all its restaurants / bars. Please note that the Pfefferbett requires that you notify them in advance if you are coming with a dog.

Berlin has a number of relatively common rules when it comes to visiting the city with a dog. Check out the dog-friendly Berlin map to get started.

First of all, the city requires that you walk your pet on a leash in places with people, as well as in public transport and buildings. Your leash must not be more than one metre long, except in parks, where it can be no more than two metres long. Fighting dogs must wear a muzzle at all times.

KEEP YOUR DOG ON A LEASH IN AREAS WITH PEOPLE.

However, some parks and public buildings in Berlin prohibit dogs. Don’t hesitate to ask before entering an area. As for restaurants and shops, it’s on a case-by-case basis, but we’ve been able to take Mocsing, in his bag, to many places including restaurants (see below) and various shops and malls, including the prestigious Galeria Kaufhof Berlin located on Alexanderplatz. However, this freedom of movement is perhaps, at least in part, due to the fact that our dachshund is very small and has always remained in his bag. Nevertheless, some establishments, such as the Billa supermarkets, for example, categorically refuse dogs entry. This ban is often mentioned at the entrance, but this is not always the case.

You should also be aware that Berlin requires you to pick up your dog’s poop. In fact, it is very rare to see any dog poop on the ground within the city limits. It may have something to do with the fines that come along with being caught leaving your dog’s business on the sidewalk.

Finally, be aware that the streets of Berlin can be quite dangerous, mainly because of the bicycle paths that often take place on the sidewalks. This is why it is important to be alert and watch out for bicycles and other vehicles that may arrive fairly quickly. We had no problem, but we were aware of this potential danger.

Going to Restaurants With Your Dog in Berlin

There are many “dog friendly” activities in Berlin. But the most complex issue is that of restaurants, cafés and bars. We tested a number of them and were pleasantly surprised to find that dogs are rarely refused. Again, keep in mind that our dog is 5 kg and stays in her bag. Her small size may have something to do with how often we were accepted.

We were able to eat in one of our favorite restaurants in Berlin, Mr Vuong, a very affordable Vietnamese restaurants with tasty food. Although we were able to bring Mocsing indoors, the restaurant has a terrace, which is convenient for big dog owners. Be careful, it is common to queue and wait a long time to get a table.

We also tested YamYam Berlin, a Korean restaurant that also accepted indoor Mocsing. Again, it is customary to queue there and wait for a while before getting a seat. Make sure your dog can handle this amount of waiting. Unfortunately, some restaurants, such as Ishin, refused us access to their establishment because of Mocsing. Japanese restaurants do not seem to be very open to letting dogs in. We don’t blame them one bit, just thought we should let you know.

We also went to Transit, a fusion restaurant chain – supposedly Thai and Indonesian, but with Chinese and Vietnamese inspired dishes – of very good quality. There again, our dog was accepted in the dining room, staying in his bag.

As for cafes and tea rooms, we were able to bring Mocsing to Good Fellows, a chain of cafes similar to Starbucks and found at several locations in Berlin, including Alexanderplatz. They offer free wifi. Even better, our favorite tea shop in the German capital, Chen Che, also accepts dogs, so we were able to bring our little dachshund with us. We highly recommend this well hidden place, beautifully decorated and offering tea of rare quality.

So is Berlin a Dog?

So, is Berlin really a “dog friendly” city? Should you plan your future trip with your dog to this city? The answer is yes. We have never felt uncomfortable taking our dog anywhere we went. We were very rarely refused entry to a place because of it, and it was pleasant. We therefore recommend that you try the experience!

PrevPrevious ArticleDogs Aboard! 7 Lessons Learned While Flying With Our Dog
Next ArticleBritish Airways is Dog FriendlyNext