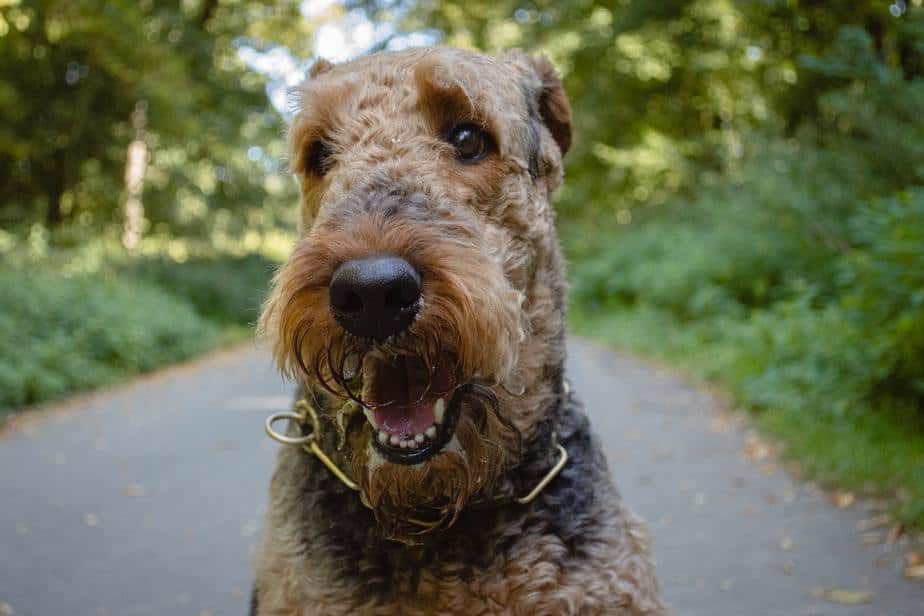 SHARE THIS ARTICLE!
Facebook
Pinterest
Email
Known as the King of the Terriers, Airedale Terriers are largest of the Terrier breeds of dog. Get to know them!

The Airedale Terrier is a medium 45 to 65 pound dog that usually reaches between 22″ and 24″. Known as the King of the Terriers, they are largest of the Terrier breeds recognized by most organizations, including the American Kennel Club, this dog is an utter delight! When it comes to chasing small animals, you can bet this powerhouse of a dog lets its terrier nature shine!

Airedale Terriers are typically tan on the ears, head, chest, undersides, legs, and sometimes on the shoulders.  They are black or grizzle on the sides and upper parts of the body.  Sometimes they have a red mixture on the black or white markings on the chest.  Certain strains of the breed also have a small white patch on the chest.  Their wiry, dense outer coat requires regular grooming.

Did you know that they are full of energy?

If you are looking for a dog with plenty of stamina and energy, look no further. The Airedale Terrier is full of energy. This dog will enjoy (and requires) daily exercise and play.

They are loyal and protective if their family

For a family that enjoys outdoors and exercise, the Airedale Terrier is an excellent choice. Generally speaking, they do best with older well behaved children and are not ideal for homes with smaller pets. All terriers have the tendency to chase small animals, especially rats and other pets considered as vermin. These dogs were bred to chase them. The breed dates itself back to 18th century England. The breed is a cross between an Otterhound and a Waterside Terrier.

These were working dogs

Airedales were bred for hunting small game and were later used in big game hunting, police work and as an army dog during World War II. These dogs love to learn and can be trained easily provided training is fun and not monotonous. The Airedale Terrier is now considered more of a family pet than working dog. But that doesn’t mean they forgot their heritage! They do love to work and have tasks to do. Some still make good hunting and tracking dogs.

How To Groom An Airedale

If you are wondering how to trim your Airedale terrier, look no further! No we aren’t going to give you a detailed tutorial. There are many much better video tutorials out there than what we could offer.

How To Cut An Airedale Terrier

How To Groom An Airedale Face

How to style the head

How To Hand Strip An Airedale

How To Train An Airedale Terrier

How To Train An Airedale Terrier Puppy

Here are some tips you can use to keep your Airedale terrier pet dog well-behaved:

You have to start training your Airedale terrier pet dog as early as possible.

Some people make use of the leash or of the crate to abuse their animals. What you need to know is that each method of training can only be effective if used in a way that will not harm the animals. You need to be firm but gentle with your animal when you are trying to train it. Use the various implements humanely in such a manner that will encourage your dog to behave well and not scare it from behaving badly.

Before taking your Airedale terrier pet dog outside, try to observe its behavior inside

This will give you a clue as to how the Airedale terrier pet dog will act outside the house. Many people say that a dog’s behavior inside a house is very different from the way that the same dog will act in outside environments. This is not true. If your Airedale doesn’t listen to your commands inside the house, how can you expect it to listen to your commands outside? Outside, where the things are a lot more interesting for dogs to sniff or chase, who wants to listen to commands?

Keep your temper: training can get very frustrating…

You should not lose your temper. Negative actions such as hitting or shouting at your dog will not accomplish anything positive. Sometimes, we have a tendency to take out our frustrations on helpless pets. Do not blame your problems on the dog. If you know that you are having a bad day, do not even think about training your dog. Your dog will learn nothing and that would only increase your frustration.