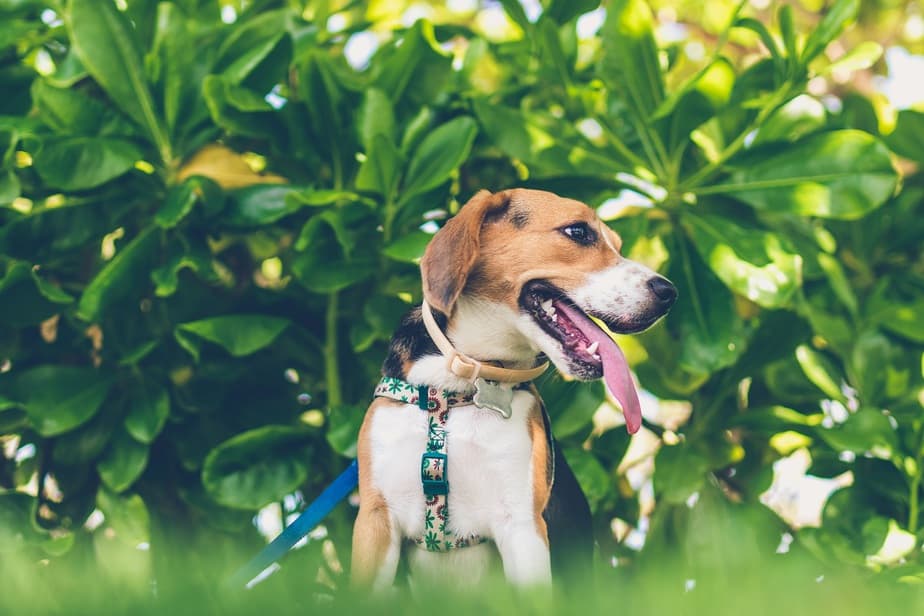 Did you know beagles come in different colors? Most dog associations, like the American Kennel Club will recognize specific coats for the breed: orange and white, lemon and white, red and white or tri-colored. Black, white and tan tri-colored coats are the most common looks for beagles.

How Big Does A Beagle Get?

This loyal family companion is considered a small to medium sized dog. The average beagle weighs between 20-28 lbs and is 12″ to 16″ in height. It’s the perfect size for a hunting dog…or a cuddle bug!

What Is A Pocket Beagle?

Nobles hunted with packs of miniature beagles as early as the 13th century. These dogs were replaced by 13” and 15” breed standards we know today. As early as the 13th century, nobles hunted with packs of tiny Beagles. Known as “glove Beagles,” because they reportedly fit in the palm of a heavy leather hunting glove, they were eventually replaced by the 13-inch and 15-inch Beagles we know. Modern breeders have recreated mini beagles or as they are often called pocket beagles.

Because of their high energy level and need for regular exercise, beagles are more compatible with active families that have a yard where they can have plenty of time to romp around. If you are looking for an affectionate dog that enjoys family companionship and loves to play, then the Beagle is the perfect pet for your family.

Beagles feel right at home with other dogs, pets and children. They do not require much socialization and enjoy the companionship of other family members (human or otherwise).

How Long Do Beagles Live?

Beagles are long lived. On average, a beagle will live between 12 and 15 years. Make sure you are dedicated to your pet for the next decade and a half at least if you plan to adopt a beagle.

How Much Do Beagles Cost?

It depends on a lot of variables such as age, pedigree, sex, etc. but the average prices we’ve seen go as low at $450 all the way up to $1500 in some cases. Seasonality impacts price as well as litters are not always available. If you are adopting a dog from a rescue, then prices will not be tied to breed type.

How To Train A Beagle?

They have an excellent sense of smell which makes them good at tracking and as narcotics dogs.

How To Train A Beagle Puppy To Hunt?

This English scent hound was originally bred for hunting rabbits and quails. These dogs hunt in packs or pairs. You can train your puppy to hunt solo though. Check with your local training schools for this as this is wayyyy out of my comfort zone.

What Do Beagles Hunt?

Beagles are used to hunt a variety of game: anything from wild boars and foxes all way the to hares and rabbits. They are also known to go after game birds, some deer and even bobcats!

Why Do Beagles Howl?

Beagles are a hunting breed, and howling is their way of telling their hunter that prey has been sighted or caught. You must have done some research on the breed before adopting a beagle and come across that bit of information. It’s a common trait of hunting dogs, boy do they love to howl. We have a miniature dachshund at home that sometimes wants to act as a backup doorbell!

How To Stop A Beagle From Barking?

Today, beagles’ primary role is one of companion or family pet. However, they are very good hunting dogs. You need to take the breed’s noble heritage into consideration when dealing with a barking beagle.

How To Draw A Beagle Dog Step By Step?

Snoopy – the real star of Charles Schultz’s Peanuts – is an American icon. Snoopy stole the show in every Peanuts strip he appeared in. He fought the Red Baron from the top of his dog house, was the proud owner of original paintings by both Vincent Van Gogh and an Andrew Wyeth (the Van Gogh was sadly destroyed by fire), never quite finished his novel but typed the opening line “it was a dark and stormy night” countless times, and had a twin brother named Spike who lived in the desert outside Needles, California. Not bad for a Beagle.

Why Are Beagles Used For Testing?

Because these poor beasts are one of the most docile breeds with humans. They trust us and we put them in labs to poison them slowly or test different types of products on them. It’s just gross. While I understand why some pharmaceutical companies are testing on animals, it’s still a rough reality to face. I draw the line at them being used to test vanity beauty products.

Why Do Beagles Stink?

Their medium length coat is smooth and hard. It requires minimal brushing and only needs washed occasionally. Beagles are not generally stinky dogs. We have a few grooming tips to help you with your smelly mutt. If the smell persists, you should make an appointment with your vet.

Beagles are known for dental issues so don’t neglect the toothbrush!

Beagles have 42 teeth, just like any other dogs. However, one thing the breed is known for is dental problems. Your dog may have a higher likelihood of showing some tartar build-up that can lead to issues. Clean your pet’s teeth often!

What Size Crate For A Beagle?

We’re no experts but based on the size of an average beagle, you would need a crate that is at least 36 inches for your dog to be comfortable and enjoy its crate.