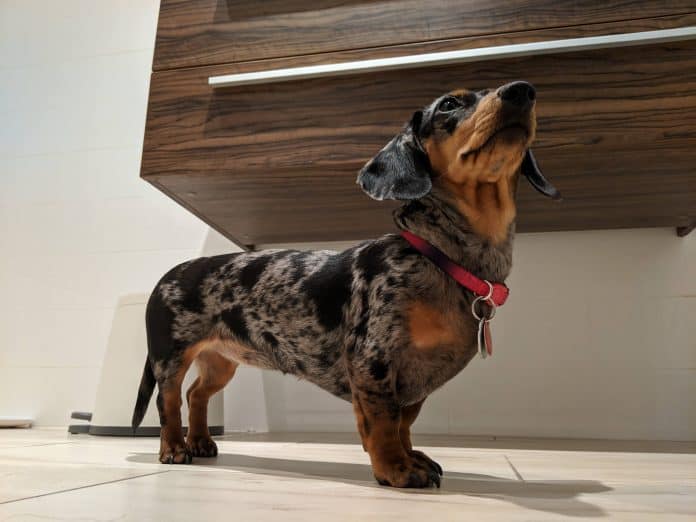 The dachshund is a breed that many humans see as adorable. Doxies, as they are commonly called, have sausage shaped bodies resting on top of strong little legs. We can’t begin to count how many times we saw strangers in street smiling at our short and sassy sausage. Their proud Roman heads and velvet ears make them stand out despite their small stature.

Now throw in some deep, soulful almond shaped eyes that get us every time and you’ve got a good description of a doxie. This also could be a cuteness factor for the breed as many wieners know how to melt hearts with just one look. This breed was one of the first eight original breeds to be recognized by the American Kennel Club. However, Dachshunds are a much older breed.

What Are The Origins Of The Dachshund?

Dachshunds are said to be dating back to medieval Germany but the origin of the breed is uncertain. The breed standard was developed in 1879 in Germany. That’s why dachshund sounds so German (it is!).

This breed is a bit of a mystery because wiener dogs are considered to be hounds but with some uniquely terrier traits thrown into the mix. Some theories postulate that the breed evolved from basset hounds in Germany mixed with terrier dogs. Others think that dachshunds are 100% all terrier and took on some hound characteristics. Most doxie lovers do not bother with such classifications. Dachshund lovers don’t bother with such classifications.

What dachshund were bred for?

The dachshund was bred for its skill as a badger hunter hence their name. They are not small lap dogs but dogs bred to hunt badgers and rabbits depending on their size.

Yes they are! You can see some pictures all over the internet of folks hunting with their doxies. I have seen and heard of dachshunds still hunting rabbits. I am not too comfortable with hunting. I have nothing against it but I can definitely say that I am not the best person to give pointers on how to train a dachshund to hunt. So, off you go to find that information on another website!

Why Do Dachshund Have Short Legs, a Long Torso (and the Rest)?

They have sausage shaped body and short legs allow them to go after animals who dwell underground. They can slither around using their short powerful legs. These days, their pointed muzzles and flexible little spines are helping their burrow through blankets more than anything. I guess it works out for everybody!

What Does Dachshund Mean?

Ever wonder why dachshund is pronounced doxin (or doxie or other similar sounding things?).

Well, the proper question is what does dachshund mean in German?

The first thing that dachshund lovers learn is that the breed comes in two sizes. Despite their different sizes, standard and miniature doxies are both agile hunters. Miniature dachshunds were bred to combat a rapid rise in the rabbit population in Germany in the 1800s while the bigger variety was used to hunt badgers. To this day, doxies are tough little dogs with strong hunting instincts.

The breed has a big variety of coats and colors combinations. The three types of coats are: short-haired, long-haired, and wire-haired. It’s pretty much the same body type but many combinations of looks. This wide range of coats and colors make the Dachshund one of the most unique breeds. No two doxies are alike: from smooth wire haired and long-haired to red black cream-colored chocolate or gray to dappled striped and sable patterns.

Quick answer is: no, dachshunds are not hypoallergenic.

Which Dachshund Sheds the least?

All dachshunds shed, no matter what the coat. However, the long-haired variety sheds the most.The short-haired variety also sheds a bit more than the wire-haired one. We noticed that our short-haired miniature dachshund sheds but it’s easily manageable in terms of cleaning.

The journalist HL Mencken famously said a dachshund is a half dog high and a dog and a half long dog. These dogs have an elongated ribcage that makes them very recognizable. So much so that they were used as a logo for the 1972 Munich Olympics.

People have owned dachshunds since Egyptian times according to some mummies found. They were also very popular across European courts. Queen Victoria loved them very much which could explain why they still remain very popular in Great Britain.

Dachshund owners say that they’re fearless strong-willed dogs. They are often referred to as big dogs on little legs. Since they have a great instinct for burrowing underground, your doxie may have the lovable (but incredibly weird) habit of tunneling under blankets. Dachshunds also love to dig and retain many of their hunting instincts.

The dog is very much as it was originally and tried very hard to keep it that way it’s basically a hunting dog it also has a very stubborn streak to it which makes it a challenge. They bark a lot and can be a bit impatient.

Why Are Dachshunds So Stubborn?

Dachshunds were bred to go deep underground and chase rabbits and badgers. They are most likely stubborn because of their independent nature. With no human around to back up their decisions when in burrows, these smart little dogs developed a second nature for decision making.

Is it Hard to Train a Dachshund?

Since dachshund are notoriously stubborn, you have to learn to get the dog interested in something. Dachshunds are the most versatile breeds when it comes to types of training they enjoy. However, the breed does have a very stubborn streak. Training is something that you have to be very patient and consistent on. As they say: the dachshund trains you, not the other way around.

What Kinds of Bones Can Dogs Eat?

Flying Swiss With Your Dog, a Review

Traveling With Pets Aboard Air Canada