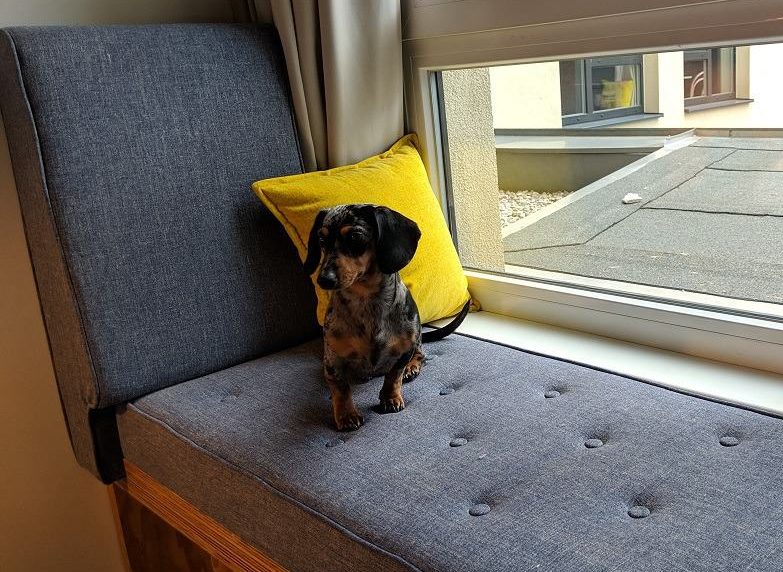 SHARE THIS ARTICLE!
Facebook
Pinterest
Email
Located near Vienna Central Station, Hotel Schani is ideal for transiting Vienna. But is it made for travellers with a dog? Discover it!

During our trip to Europe in February 2019, we passed through Vienna three times, including once on our way back from Berlin to Gmunden, a small town near Salzburg. We stayed twice in the 25hours hotel, but this time we were only passing through and wanted a place close to the main station so that we could easily leave by train.

Following a search, we found the Schani Hauptbahnhof hotel (they recently opened a second one in the city center), which precisely met our requirements and was well rated. We booked a night there, for us and our little dog sausage. Here is the story of this experience.

Our opinion on the Schani Hotel: the advantages and disadvantages

Where is Hotel Schani located in Vienna?

The Schani hotel is a stone’s throw from Vienna’s main railway station, the Hauptbahnhof. It is therefore ideally located for travellers in transit. But it is also directly accessible from the airport, by train, and from the metro with the Hauptbahnhof station (line U1). The central station connects all of Austria and neighboring countries, including Hungary, Italy, the Czech Republic…. It is therefore a must for those travelling by train with ÖBB or another company.

It should also be noted that from the Hauptbahnhof metro station, it is possible to reach downtown Vienna in a few minutes. Moreover, the area (between Sonnwendviertel and Favoriten) in which Hotel Schani is located has many shops and restaurants. In short, this hotel is ideal for transiting, especially with a dog, since it is easily accessible and close to the main station.

Recap of our Dog in Hotel Experience

Before getting to the heart of the matter, let’s take a quick look at this very friendly hotel. First of all, this one is very attractive. Its decoration is contemporary and very functional. Once the entrance is full of plants, you arrive at the reception, which also acts as a bar / restaurant. This place is very large and bright. It also includes a work space on a mezzanine and overlooks a large green garden. The rooms are on the first floor.

The rooms are spacious and very well furnished. We loved the quirky design touches in the rooms. The hotel promotes a concept of “SMART technologies” that has been found to be relatively limited. It is possible to download an application that allows you to choose your room, but also to check in and check out. It also provides access to certain information, such as weather. We preferred to do business with the people at the reception!

The welcome of pets and breakfast are extra. Otherwise, the hotel proposes:

That’s it, that’s about it. The services offered by the Schani are thus relatively limited, but appreciable.

As everywhere, the price of a night at Schani varies according to the season and the type of rooms you select. There are three types of rooms:

The difference between these rooms is the view (a Smart street overlooks the street and a Smart garden over the garden) and the size (the Smart house is much larger). But the proposed experience is quite similar:

As for the additional cost for a dog, it is 15 euros, which corresponds to the rate charged by the 25hours, also in Vienna. Once again, it is possible to pay this supplement directly online, when booking, and we had no problem doing so – which is rare!

The Dog Side of Things

The hotel didn’t give us a bowl or a dog bed. It’s common in Austria. It doesn’t bother us because during trips, Moscing gets to sleep with us. Yes, we spoil the dog too much but it works out great when we don’t necessarily want her eating random things on the floor during the night. She once found popcorn from somewhere in a hotel room in Quebec! Our stay with Mocsing went very well in this hotel. We inherited a room at the end of a hallway, with no one around. So the night we spent there was peaceful. We never leave our dog alone in hotel rooms as a general rule but we would have done so happily here. No fear to be had, this hotel is really dog-friendly.

Dogs in Common Areas of the Hotel

We had no problem taking Moscing everywhere with us in the hotel. We had a nice lemonade at the bar with the dog, ate breakfast with dog in tow etc.etc. No problem at all. This hotel is one of the most dog-friendly hotels we’ve been in on this trip to Vienna.

When we arrived from Berlin (Tegel), at Vienna Airport, we took a train that stopped at Vienna Central Station. These trains pass very regularly, are inexpensive (less than 10 euros) and lead to the Hauptbahnhof in about 20 minutes.

This trip is ideal with a dog, because it is simple and fast. Mocsing was able to stay in his carrying bag the whole time. We had little time to wait and arrived at the station quickly. Vienna Central Station is relatively small and easy to find. The hotel is located to the south of it. Once out, we walked along the station and reached Hotel Schani in less than 10 minutes.

SMART technologies” concept requires, the hotel reception is equipped with terminals that allow you to check-in yourself with the hotel application. We chose not to follow this path and went directly to the reception desk. The hotel staff we spoke with were very friendly and helpful.

It should also be noted that the hotel allows for late check-out (leaving later than planned). The official check-out is at noon, it costs 10 euros per hour to stay longer.

We are planning to go back to this hotel on our next trip to central Europe because it’s ideally located, the rooms are great and…it’s dog-friendly! The awesome thing with reserving this hotel is that you can specify that you come with a dog and pay their fee in advance to avoid bad surprises.