Vueling’s Pet Policy for Those Flying With a Dog 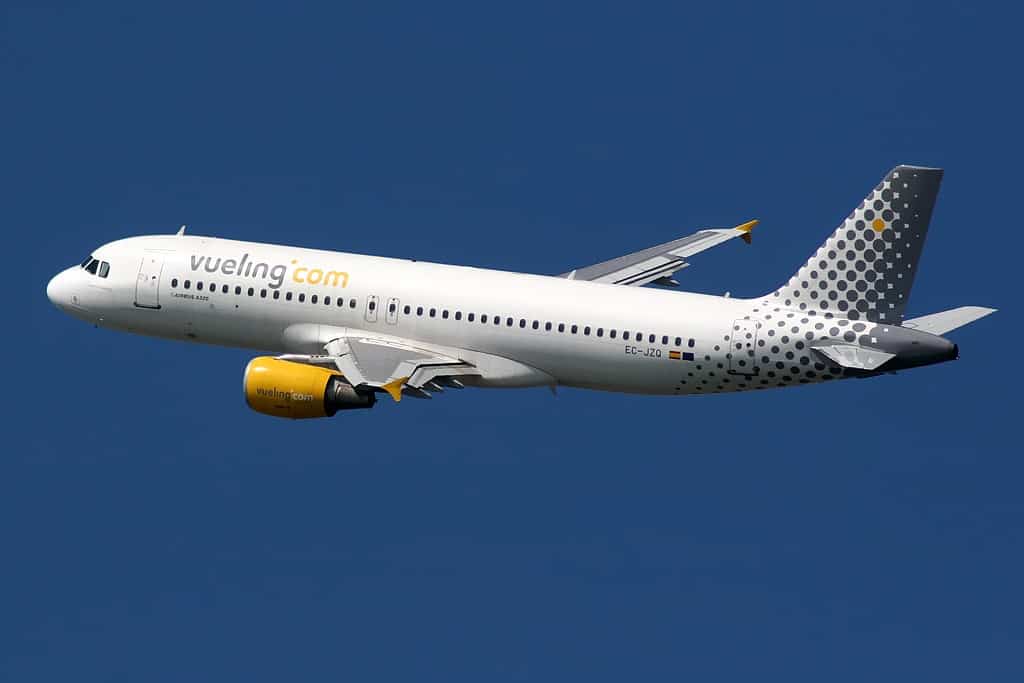 During our September 2018 European trip, we had to fly a lot between Spain, Italy, Switzerland, Austria and Hungary. We were looking for one or more companies that would help us do this, but this was our first trip with Mocsing (our little sausage dog). We have therefore embarked on an in-depth research to find airlines allowing dogs in cabin. We first thought about going with Easyjet but they don’t allow dogs in cabin. Same goes for Ryan Air.

This is how we came upon Vueling. We knew about the airline but had never flown with them. After doing our research, we picked them to go from Barcelona to Rome, Rome to Zurich and Budapest to Barcelina. Here’s a review of our experiences flying with our dog in the cabin aboard Vueling.

A Review of Vueling: Pros and Cons of the Airline

Does Vueling Accept Dogs on Board?

Yes, Vueling allows dogs on board its aircraft, but only in the cabin, which greatly limits the possibilities. The weight and size of your dog will determine if you can fly with Vueling or not. It should be noted that other animals are accepted (cats, birds, fish and turtles).

Vueling only accepts dogs in cabin.

In addition to the weight and size of the dog (and the bag in which it will travel), here are the other limitations introduced by Vueling:

You can find all of the official rules on Vueling’s website.

Can Dogs Fly in Cabin Aboard Vueling?

Actually, your dog can only fly in the cabin on a Vueling plane. The cargo hold is not an option offered by the company. If your dog is large and/or heavy, you will have to look for another company – Swiss allows dogs in the hold and Austrian too, for example.

To fly with your dog in the cabin, it must be less than 8 kg (including the bag) and fit into the bag not exceeding the legal dimensions. As mentioned above, he must also have a health certificate issued by a veterinarian attesting to his good health and that he meets the requirements of the country of destination. A European passport can also do the trick if the dog’s vaccinations (and its chip) are in order.

Only Dogs weighing less than 8kgs (including their transport bag) are accepted on board vueling.

Vueling takes care to specify that your dog must not be a nuisance for other passengers: behavior, smells, etc. If the plane staff believe that your pet does not meet these conditions, they reserve the right to refuse it in the cabin.

Note that we can confirm that Vueling staff are checking the dog’s papers. This was particularly the case in Barcelona (and Rome to a lesser extent). Be sure to be able to meet the requirements listed here before booking with this company.

What Bags are Authorized Aboard Vueling?

The dimensions of the dog bag authorized by Vueling to allow you to fly with your dog in the cabin are as follows: 45 x 39 x 21 cm. With your pet in its breast, it should not exceed 8 kg.

Although not mentioned on the company’s website, Vueling’s ground staff checked if Mocsing could get up and turn around without too many snags in Budapest – even though we were more than 5 hours late and it was 2am. So be careful at this point.

Booking a Plane Ticket for Your Dog on Vueling

Unlike Air Canada and all the other companies we have used with Mocsing (except Transavia) so far, Vueling allows you to add a dog to a reservation directly on the site. This is particularly practical and saves time. We have had no problems with this, and the ground staff have good access to the information provided online – including payment information.

Vueling is awesome because it allows you to book your dog’s plane ticket online.

Vueling specifies that it is necessary to choose a basic rate to be able to add a dog. The company seems to imply that the only time to add it is online during your booking – “Customize your flight” section. Vueling verifies everything pertaining to the dog during the check-in process. It’s not possible to check-in online for that reason.

The price for a dog in the cabin with Vueling is 40 euros for a domestic flight and 50 euros for an international flight or to the Canaries. By “domestic flight”, we mean of course Spain, since it is a Spanish airline. These are relatively reasonable fares since Swiss, for example, charges 60 euros for a flight in Europe.

Our Experience Flying Vueling with a Dog

Overall Review of the Experience

Because of these repeated and systematic delays, we cannot really recommend the company to fly with a dog, unless the dog is extremely calm and patient. The fact that you have to check in at the airport means you have to check in at least 2 hours in advance. Add to that the transport to and from (on arrival) the airport, your dog will already be confined in his bag or in a restricted space for a long time. If you add to this 1 to 6 hours delay, the time becomes long and is similar to that for a long-haul flight. The problem is that for a long distance, we generally prepare ourselves differently. In short, the delays posted by the company are a real problem.

WE CANNOT RECOMMEND VUELING DUE TO ITS CHRONIC DELAYS DURING OUR FLIGHTS WITH THIS COMPANY.

The space assigned to each seat on board the company’s aircraft is really limited. This was really the case for our flight from Barcelona to Rome. Our original aircraft was not available and a replacement aircraft had been dispatched. It was not a fun experience. We experienced a situation where a person in front of us insisted on lowering his seat (despite our request to be careful with the dog), the dog’s bag was crushed. And don’t count on the staff to help you with that problem. We get why because it’s a low cost airline but still…it was not the best experience for our dog. Having to deal with delays and discomfort is hard.

Check-in at Barcelona, Rome and Budapest

As described earlier in this article, Vueling was quite meticulous with the verification of Mocsing, her doggy bag and papers. However, each destination had its things. In Barcelona, everyone was focused on the papers. Same as in Rome. But not at all in Budapest where the staff didn’t even look at the papers, but tried to check that our dog could get up and turn around in the bag.

Vueling carefully checks the certificate provided by the veterinarian, as well as the vaccination papers. It is assumed that with a European passport, these checks are simpler (our papers were in English and from a country that the staff may not be familiar with). But be advised that your papers must be in good order before flying with the company.

Finally, as far as the bag and the dog check-up are concerned, this only happened in Budapest. But again, the staff was very diligent and it was a good bet that someone who was not in good standing would have had problems. It should be noted that this check-in was done before boarding (very late in this case) and not at check-in, which is particularly worrying. A lady flying with her dog was set aside because staff felt that her animal could not get up and turn properly in her bag. We don’t know what happened to that person. It would be nice to be warned about this before the final step, meters away from the plane itself.

PrevPrevious ArticleAre Dogs Allowed on Ryanair Flights?
Next ArticleBringing a Dog into CanadaNext